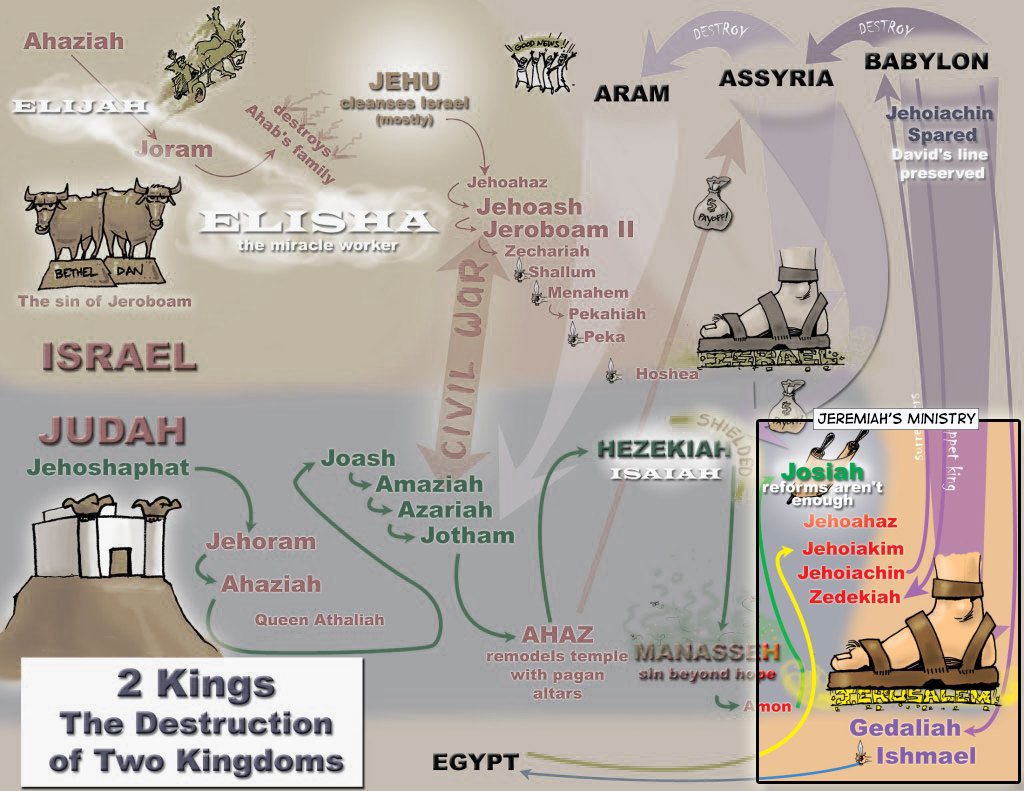 Jeremiah was a prophet who began his preaching ministry during the heyday of Josiah’s spiritual reformation and watched the nation slide down a slippery slope of wickedness that eventually ended in the total annihilation of the city of Jerusalem.  Jeremiah’s story is one of both encouragement and discouragement.  On the surface it may appear to be nothing more than discouraging.  His ministry went from GREAT to BAD to WORST POSSIBLE SCENARIO.

Typically we like stories to move the other direction.  We like the stories where the hero starts off in a bad place and misunderstood and fights against the odds, battling evil and injustice, until he finally prevails, justice is served, and they all live happily ever after.

Jeremiah’s story is just the opposite.  He starts off in ministry preaching during the reign of Josiah.  King Josiah was the one who was appalled by what his evil grandfather Manasseh had done and spent his carreer rebuilding the Temple, tearing down all the pagan idols and altars, and retraining the people to obey the Law of Moses.  What preacher would not enjoy that scenario?  The king asked him to go up and down the streets telling the people to repent and get right with God.  The young preacher Jeremiah must have strutted with confidence during this early preaching.  After all, he had the king and the king’s army backing up his message!

Then Josiah died and it was the beginning of the end.  The chart shows the succession of kings that followed Josiah and the various, and increasingly difficult, levels of interaction Jeremiah had with these rulers.  In three months time Jehoahaz reintroduced all the paganism of his great grandfather Manasseh.  Jeremiah called, “foul” and accussed Jehoahaz and all his people of stinking like a rotten loincloth (by the way, not a good idea if you want to be “in” with the powers that be).  There was a plot to kill Jeremiah after that.  Fortunately for Jeremiah, Jehoahaz was quickly captured by the Pharoah of Egypt and taken into captivity.  Pharoah Neco placed Jehoahaz’s half brother Jehoiakim on the throne in Jerusalem as a puppet king.  During Jehoiakim’s reign the world powers were shifting hands and his vassalship was taken out of the hands of the Egyptians and assumed by the Babylonians.  From that point on Nebuchadnezzer was the clear and present danger for the city of Jerusalem.

During Jehoiakim’s reign Jeremiah did two things.  First, he wrote down all his really juicy messages on a scroll and had his partner, Baruch, read it to the king.  Basically, the message said, “The Lord is going to use Babylon to destroy you.  If you want to repent, He’s ready to stop the process.”  Jehoiakim took the scroll and burned each section right after Baruch read it.  I don’t think he was clearly getting the point.  From that point on Jeremiah’s life became a game of cat and mouse with the kings of Judah.  Jeremiah was brought to trial for treason and treachery, but there were still a few good men left in the city at this point that came to his aid.

The second thing Jeremiah did during this time was to complain.  You’ll find interspersed amongst his messages of warning and woe to the king, the occasional aside to God that goes something like this, “Excuse me Lord!  I didn’t sign up for this.  I liked the good old days with Josiah when my words had power.  Now I speak what you ask and the people mock me, hate me, and try to seriously hurt me.  Can I get off the ride now, I’d really like to go home.”  Don’t blame him.  I think I would have complained as well (as a matter of fact, I think I have whined like that a few times).  In the end the Lord would remind him that all that is required of him is obedience…nothing more.  God was not judging him based upon his audience approval or his “ratings.”  God wanted nothing more than absolute surrender.  This was a dark time for Jerusalem that wasn’t going to get better and somebody had to deliver the message.

After Jehioakim died, his son, Jehoiachin, took over.  Even though he was evil like his father, Jehoichin did something right.  Out of all the kings in this story, he was the only one who actually listened to Jeremiah.  By this time God had already determined that Jerusalem was going to be destroyed at the hand of Nebuchudnezzer, king of Babylon.   Yet, God took compassion on His people and offered a way out for those who would be willing to listen to the words of Jeremiah and obey.  Jeremiah told the people to surrender to Babylon and God would spare their lives.  “What!  Surrender to the enemy?!?  How could this be the word of God?”  Well, it was.  Now whether Jehoichin was actually a smart man and was willing to obey the word of God, or was just a plain coward and didn’t want to fight against Babylon is a question for debate.  In either case, Jehoiachin did surrender to Nebby and was carried off to Babylon along with all the important people of the city and anyone who wanted to obey Jeremiah’s instructions.  This is the actual beginning point of the Babylonian Exile.

Neb left behind Jehoiachin’s uncle, Zedekiah, to be the puppet king over the stragglers left behind.  Like many people who are placed in power, Zedekiah thought he was tougher than he was and decided to rebel against Babylon.  Bad idea.  During this part of the story things got really ugly for Jeremiah.  The people hated him because they thought he was a traitor for telling everyone to surrender.  Their hatred for him got him thrown into a few different kinds of prisons – a dungeon, courtyard confinement, and a mud-filled well.  Zedekiah toyed with Jeremiah’s emotions as he would have secret midnight consultations with the prophet, making Jeremiah think he might be willing to listen to God.  In the end, he did not and ended up getting the entire city ransacked and completely razed to the ground, Temple and all.

Jeremiah stood there and watched his beautiful city —  the holy city of God, the city that was to shine like a light to the world demonstrating God’s holiness and goodness – get burned to the ground, nothing more than a billowing plume of wretched smoke.  Where were the good times with Josiah?  Where was the hope?  There are two answers to this question.  In chapters 29 – 31 we have the record of a beautiful message of hope that Jeremiah sent to his brothers and sisters of Jerusalem that had been taken to Babylon.  In that letter he told them not to be afraid.  He said that God would care for them in Babylon and that He would use the time to heal the land until it was ready to start over.  It is here that frames the context for the famous words, “for I know the plans I have for you, declares the Lord, plans to prosper you and not to harm you, plans to give you hope and a future.”

For the people there was hope, but for Jeremiah there was none.  As he watched the smoke rise to the sky and blot out the sun, moon, and stars, he penned the words of Lamentations and wept bitterly for his beloved city.  Then he was caught up in another political mess as the governor of the region, Gedaliah, was assassinated by a band of rebels.  These rebels grabbed Jeremiah and dragged him off to Egypt in order to escape the wrath of Babylon.  That is the last we know of Jeremiah.  Bummer.

How can this be a good story?  Isn’t the hero supposed to win?  While these are natural reactions to a tragic story, I would like to highlight one fundamental flaw to this reaction.  You see, the reason we want the hero to win, the reason we want our own lives to work out like the “good guy wins” movie, is because we think we are the hero.  There’s the flaw.  We aren’t the hero.  The truth is that the hero does win in this story, its just that Jeremiah wasn’t him.  Jeremiah was just the humble servant of the hero.  The hero is Jesus.  Jesus is the hero who ultimately wins the fight and gets the girl in the end (the church is his bride, remember).  Jeremiah was, and we are, simply servants.  We may be called to a glory lap in the long distance race of God’s story, and that would be wonderful.  However, we may also be called to a very difficult and treacherous leg of the race that ends in pain and obscurity.  That was how all the apostles ended up.  Thousands of great men and women have shared Jeremiah’s story.  Let’s be sure that we don’t get caught up in “hero worship” in the American church.  “Success” takes on many faces in the game of God’s will.  All we need to worry about is staying focused on the master and being willing to obey, no matter the cost.

A Cartoonist's Guide is connected to my site stevethomason.net. Subscribe to my monthly newsletter and I'll send you fuel for your journey on the topics of Bible, Theology, Spiritual Formation, and Art. Peace. CLICK TO SUBSCRIBE
Holler Box